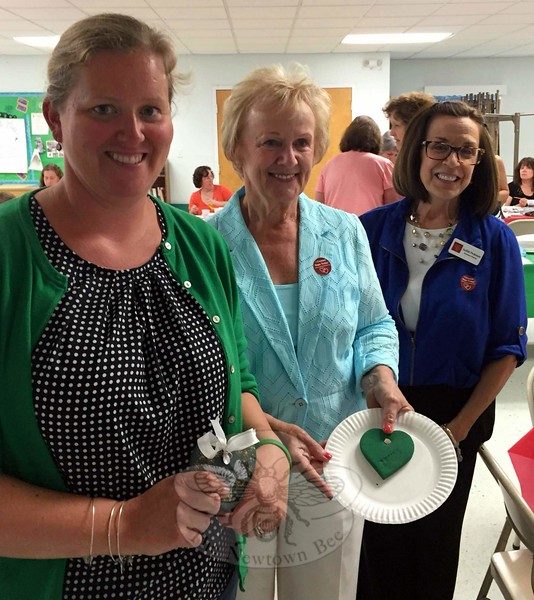 Since February 2013, residents have become familiar with Hearts of Hope, a program that invites peo-ple of all ages to paint palm-sized ceramic hearts with simple messages of hope. The unique hearts are then left to be discovered by strangers, who are encouraged to keep them and take them home. A col-lection of hearts was sent to Newtown two months after 12/14, left for residents to find on Valentine’s Day, which coincided with the two-month anniversary of the shootings at Sandy Hook Elementary School. Three months later, residents had their first opportunity to pay forward some of the kindness shown in the aftermath of 12/14, by painting ceramic hearts with messages of hope for others. A Hearts of Hope-Newtown chapter was formally recognized by July 2013, and it celebrated its second anniversary on June 17. From left is HOH-Newtown Treasurer Kristen Mattera, Newtown First Selectman Pat Llodra, and Hearts of Hope Founder & Director Judy Pedersen. (Cox photo)