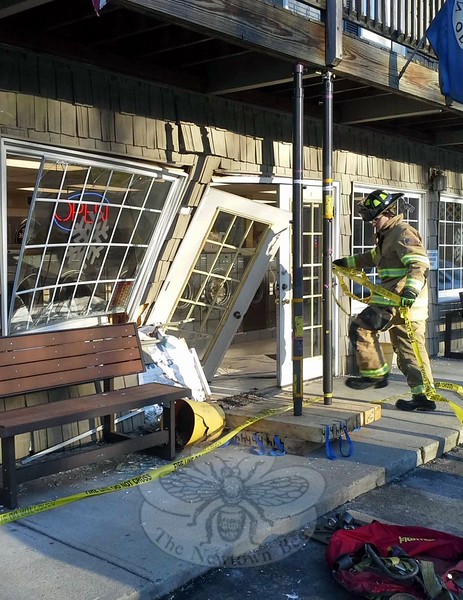 An unidentified man, who was inside PJ’s Laundromat in Sandy Hook Center, was injured at about 3:36 pm on Saturday, February 28, when a woman, who was driving a 2009 Toyota Venza SUV, inadvertently backed into the front door and wall of the building, damaging the building’s façade. Police said motorist Deborah Ludorf, 53, of Southbury was driving the Toyota when its rear end smashed into the building. Sandy Hook volunteer firefighters responding the incident used cribbing and stabilizing struts to temporarily brace a second-story balcony on the damaged structure. The injured man was transported to Danbury Hospital for treatment, police said. A damage repair firm responded to the scene at 110 Church Hill Road to make some immediate repairs. Police said they verbally warned Ludorf for unsafe backing. (Hicks photo)